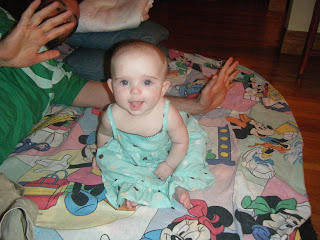 Aurora made it past her 5 month mark a couple weeks ago, it’s hard to believe that we’ve had her in our arms for almost half of a year!!  Everyday she seems to get bigger, more aware of herself and her surroundings, stronger and…as if it was even possible, more chattery.  She loves to chatter, to us, to herself to inanimate objects.  This is probably the cutest thing to watch really. 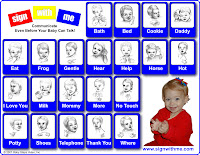 So, since I have no idea what she is saying most of the time, I decided to look into BSL (Baby Sign Language).  I did a few minutes worth of research and found a few free sites that offer a ton of help on basic signs, how to go about the process…yahdah yahdah yahdah.  We started signing to her about 2 days ago (though we have been singing/signing the alphabet to her for a few weeks now (and she loves it!), and she seems to be pretty interested in what our hands are doing.  Most of the “experts” indicate that you can start signing to your infant (and she will be paying attention sorta) at around 6 months, though she may not have the coordination to sign back to you until about 8-10 months.  They do say it’s good to start early so that Baby can understand that signing is an acceptable form of communication, since she won’t really be able to speak until quite some time.  It is becoming a really popular thing with parents too, apparently.  And you know HOW MUCH we LOVE popular (hahahhha, rolling eyes).  But the best part is that teaching your child to sign helps them learn to speak quicker and helps them build connectors in their brains (yep I said brains, I just felt like ya needed a fun word, so there, I’ll say it again…Brains!)  I also went out and bought a book called “100 First Words” and have begun teaching J the signs in the book, so he can sign to Aurora also.  We’ve learned the signs for the all the pictures/words on the cover and the first page.  Now on to the rest!  Its really fun and gives us something fun to do with Aurora!! 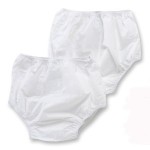 Some of you may know that in the beginning we were all gung-ho about cloth diapering, I even went as far as making 3 diaper covers, etc.  Well once I started “winter traveling” that kind of fell by the way side.  Plus she grew out of the covers (apparently that happens) and since I don’t have access to a sewing maching, I just started using, Yikes!!, disposables, then I just got lazy and gave up on cloth for a bit.  Well I decided, after getting part of my tax return, to go shopping yesterday for a few “baby” things that I’ve been meaning to look for and purchase.  I headed over to the local TRU/BRU (toys r us, babies r us) and started perusing their baby aisles.  To my excitement and surprise, I found baby waterproof underpants!!  The pull on kind.  I have been looking for them everywhere, not very religiously of course.  But was so happy to finally have found them AND in a variety of sizes!!  So of course, since I have NOT seen them ANYWHERE else, I bought a pack of each size from 6-9mos up to 2T (6/9, 12m, 18m, 2T).  Each pack came with three.  Since they are waterproof, I can just rinse one off and hang dry it, while using another.  I started using them yesterday and this morning, she pooped, and they totally worked!!  I just rinsed it out, used a bit of soap around the leg bands and Voila!  Then I hung it under the fan to dry.  So that is a success and we are on the cloth band wagon again. 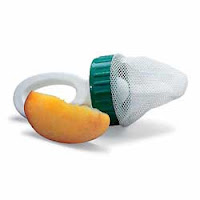 After perusing the aisles of BRU, I also found these nifty little gadgets that look like popsicle holders, they are Safety Feeders.  Basically a popsicle ring on the bottom, that baby holds onto, then a mesh bag attaches to that!  You can then place food items inside the mesh and baby chews on it.  They are pretty neat.  Since we are keeping Aurora as an EBM (exclusive breast milk) baby for the time being, it was just a buy for later.  I did test it out with some grapes yesterday, just to see what she would do and she totally loved it.  Anyhoo!!
Pop Instructions 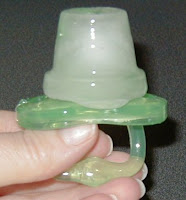 Lastly, since I doing EBM with Aurora, I thought of giving her a little treat, aside from the boobies.  I expressed some BM (breast milk) into a bottle and poured it into a little ramkin.  Then stuck a pacifier down into the cup, and placed it in the freezer.  A few hours later, I took it out, popped the pacifier out of the cup, attached to the frozen BM. WOW!! BM pops!!  I took it out to Aurora who was enjoying her bouncy chair and handed  it to her, she immediately stuck it in her mouth (like most things she gets in her grabbers) and had a perplexed look on her face, she took it out, looked at it, and stuck it back in her mouth. She repeated this process, as one eye started tearing up from the cold, and then went to town trying to eat the popsicle.  Continuing to look thoroughly confused, but happy, she started bouncing again and sucking/chomping on her BM pop.  At one point, bad momma, I thought she was finished with it.  So I picked it up off of the tray, to take it inside, she looked at me and reached toward me and burst into tears, so I brought it back, and she resumed her happy suck/chomp, until it had been semi consumed, but totally melted.  What a happy baby!!
0
Previous Post
Next Post