By Dashaina Giggles on Thursday, October 8, 2009 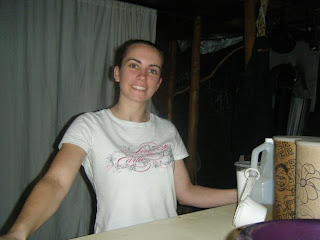 Okay so one of my subscribers mentioned that I should do a cooking show.  Plus I’ve gotten a lot of comments about doing some educational sewing.  I’ve decided to do both!  I worked on my cooking video today, but my camera battery was dying and we haven’t had much in the way of sunshine for the past few days, soooo its still in the works!  But don’t worry I will have it up soon.  I do have a bunch of photos from it though and think I will put them together for a blog recipe, so hopefully by the end of the weekend you will have a recipe for bread rolls in vid and print!  How fun is that?  Okay so after all that happened, I was cleaning up and putting the table up and trying to move the chair out of the way, and wouldn’t you know it, the table slipped and fell smack onto the top of my head, holy crap!, it really hurt, at that point I was like of course this would be my day.  It all started out with not feeling well today, then I put too much salt in the bread rolls recipe, because I was reading the measurements for sugar, and then the table.  So I think I just needed to lay down and nurse my wounded skull and take a nap, just then the phone rang!  It was J, he’s so cute, he called to check on me, so I told him all the drama, and he said “Hold on, I’m coming up!” and there he was.  He made me feel so much better with hugs and kisses and all was right with the world.  Then we took a nap and woke up feeling much better.  J went back down to the banana and I started to get dinner together.  I was making tuna casserole dome style.  By the time J was finished, dinner was ready, so we sat down for some stargate atlantis season 3 and food. After dinner we decided to not use anymore electricity so we decided to play some silly card games I have lying around.  We started with Kaboodl, then Kaboodl style Go Fish, finishing off with some Story Telling Card Game.  It was so fun, we were both laughing and really having a positive evening, its almost 11p now, so I’m gonna hit the sack…sweet dreams.