By Dashaina Giggles on Saturday, October 3, 2009 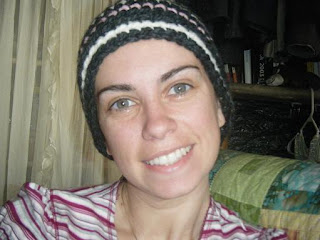 I made a crochet helmet today!  Then went up to b-town to visit A & S and their two lil’ guys, who are super cute and fun, anyway I showed A my hat and she loved it!  She had to have it right then and there, she asked me how much, I said $25 and she said sold!  So I sold my first hat today!  That was pretty exciting!  Okay well back to the rest of the day before b-town.  I hung out at the dome and crocheted all day, I made the hat and then one square for my shoulder shrug and I started a square for the baby blanket present I’m making. I made J some super tasty tortilla lunch, an apple, a banana and some animal cookies.  Then we had 2 burritos for pre-dinner snack.  We headed up to b-town around 5p and got there for dinner @6.  Dinner was mashed potatoes!! (our favorite) and steak (yumm-o), squash and salad.  It was all delicious.  Then I headed to shower before heading out and J went to play with the kids.  Then we all brushed our teeth together, me, J, A and her two guys.  It was a party in the bathroom!  It was cool though.  Then the lil’ dudes headed off to bed, but LP (the youngest one) was really wound up, so A just told him to run up and down the hall for a bit to wear himself out, and boy he did!  It was so funny, then he wandered into the room J and I are staying in and asked what I was doing, I was crocheting, he asked if he could watch and I said “sure, hop on up and you can sit next to me” and he sat there transfixed while I did double crochet after double crochet.  A came in a while later, after storytime was over, and asked LP to come get ready for bed and he negotiated with her for 5 more minutes so he could watch me crochet more, it was so sweet!  So he sat there for another 5 minutes and then off to bed.  Then J and I headed out to the chinese food place, we got there and it turns out they don’t have DESSERT on the menu.  All they had was green tea icecream or something lame like that!  J and I looked at each other, and he said “do you want to escape and go get dessert?” and I nodded vigorously and we made our apologies and off we went.  We headed down the road to the local Price Plopper and headed straight to bakery heaven, but I was so overwhelmed by all the tastiness to be had that I had to leave, empty handed.  Then we headed back to A & S’s house where we were sleeping over and played on computers and eventually headed off to sleepytime land…goodnite.