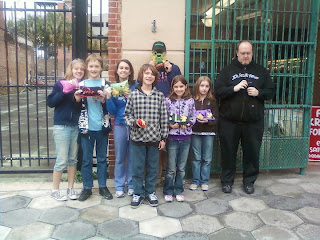 Yesterday we hung out with our friends Deet & Vrock and their kids at this Robotics Championshop at USF it was a bit silly but I think the kids had a nice time getting to see J and seeing the silly robots that all looked the same.  Eventually it got a bit dull and we decided to head over to the Ybor City Fiesta Day.  After parking I was hungry (again, imagine that?) so J mentioned this Alaskan Taco place that was up the street and I thought that sounded tasty.  We stopped there and everyone sat outside, while I went in an placed my order.  The beef taco’s and beans were really tasty! I could’ve skipped the Tamale and the guac, wasn’t as good as I had anticipated (I’ve had much better).  But we live and learn.  While waiting in line for my food to be “handmade” I noticed a flyer that mentioned a Free kids craft day just up the street and the theme was sweet dreams.  This sound like the perfect thing for us to do.  So I collected my food and joined the group outside  I mentioned it to Vrock and she said it should like fun.  So after I scarfed down my Taco and beans and some of my tamale, we headed over to Jezabelle and her wandering gyspies to have a look at what craftiness we could get into.  We finally found the place at the address posted on the flyer, come to find out that they have recently moved locations and were actually in a different directions, to we turned around and headed toward the actual location.  The kids were in good spirits and everyone seemed to be enjoying the afternoon.  We headed further into the think of the fiesta day street vendor, passing tasty empanadas and bbq pork with coleslaw, delectable pastries of vari ous sorts and sweet/salty kettle corn.  Upon closer inspection of the kettle corn stand I spied a “free sample” bucket and of course decided to have my fill!  WOW! That stuff was Tasty!  I mentioned it to Deet & Vrock and Vrock went over to get samples for all the kids.  So with popcorn in hand we continued on our quest for Jezabelle’s.  Finally we spotted it and headed inside, just inside the doorway there was a kids crafttable set up with little chairs and a bunch of fun looking craft supplies.  The two girls running the table invited the kids to sit and join them in making fun pillows.  Of course J & I wanted to do craft time too, so I sat and J squatted behind me while we made our own unique pillows. It was a blast!  Once we had completed decorating the outside of our pillow we gave our two pieces to the girl running the hot glue area and she glued them together leaving one end open for stuffing.  Then we stuffed the pillow and handed it back to be sealed in.  It was so much fun, the kids came up with some very creative designs and all in all I would say I was pleased with our afternoon activities.  After we had all completed our pillows we stood next to the shop for a photo and headed over to the cars.  Deet invited us over for dinner of Perogies and Falafel…. How could we say no??  So we piled 3 of their 5 kids in the back of our car and J & I followed Vrock to their house.  When we arrived Li was just behind us in her car and pulled into the house too.  So having everyone home, we all piled into the house and Deet began making dinner.  He makes his perogies from scratch… yes folks peeling potatoes by hand, boiling them, making the dough with flour and egg, etc.  Man, oh, man, were they worth the wait!!  They were so very tasty and probably the best potato perogies I’ve ever had.  I’ll see if I can get Deet to send me a pic and the recipe and try to post it on my cooking page.  No promises though!  Once we had our fill of perogie excellence, Deet made some very tasty Falafel and I think I started to slip into a food coma from tasty food overload.  There were lots of tasty toppings for everything from Vrocks homemade guacamole, sourcream and shredded cheddar for the perogies to the tasty “not tabouli” dill cucumber yogurt dip for the falafals.  After tucking our bursting stomachs back into our pants, we said our farewells and headed back to our tampa home for some R & R.  What a fantastic day!  Tomorrow … Kyaking on the westernshore….