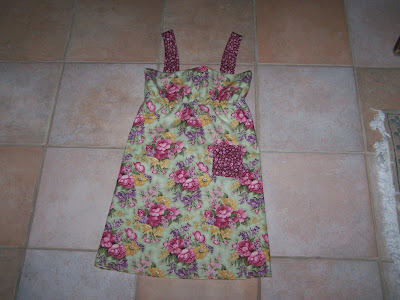 So yesterday I finally decided to use the fabric my dad bought me last year. I’ve had this dress pattern I got at joanns for $.99, and had been wanting to make it. So I cut out the first piece, based on my measurements indicating what size I would be (I misread it and thought I was a 10, turns out I should have been a 4) Anyway. So after cutting out the first piece I thought “wow, that looks like way too much fabric!” So the next piece I cut out only half, and went to work. Turns out still too much fabric, didn’t like the way the directions indicated I should do things. So I took things into my own hands. I made some alterations to the pieces, changed a few additions, added some elastic to under the bust (which solved the bunching up unevenly problem) and a few other minor mends and Voila! A dress, fits pretty good and looks great!! As a matter of fact I liked it so much I offered to make one for my fellow princess sirena dicapria. She was estatic about the idea of getting one of my dresses. So I sat down and pounded it out. 5 hours later, give or take, I had a fully operational dress, that Fit me and since she is the same size, that would fit her too. I have to say her dress looks waaaay better than mine is fully lined and could probably catch a few dollars if I tried to sell it!!
0
Previous Post
Next Post