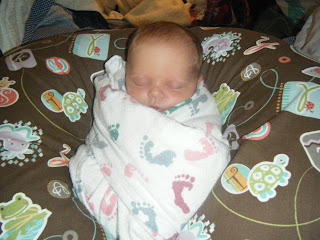 Since Aurora was a breech baby, head up in right rib and bum in my pelvic bone area, she was scheduled to be delivered via cesarean birth on Wednesday, October 13, 2010. However, she wanted to pick her own birthday and decided to grace us with her presence the day before. We did not know the sex of our baby until the doctor pulled her out of me.